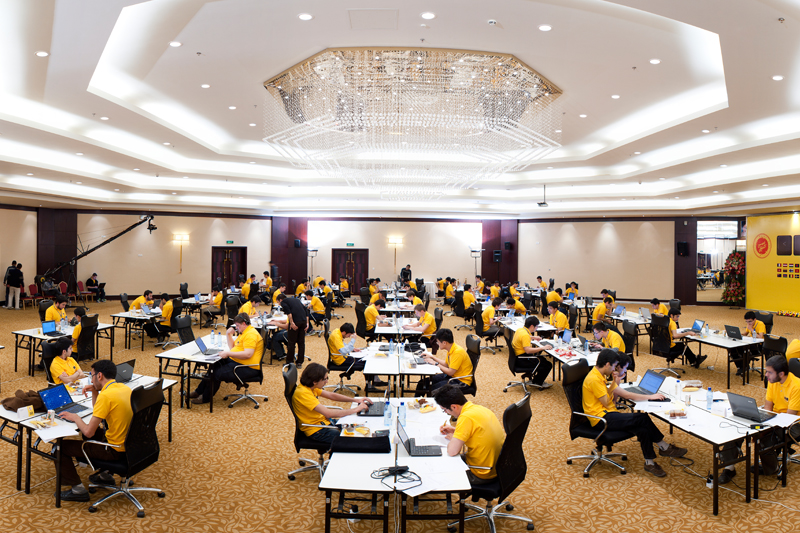 High ranked countries in Bayan Programming Contest 2014-2015.
Based on number of competitors in the top 50.

High ranked countries in Bayan Programming Contest 2014-2015.
Based on number of competitors in the top 100.

Participants Qualified for the Final Round of Bayan Programming Contest 2015

Score Calculation Method For Elimination Round

Score for each solved problem is calculated based on these values

How to Solve and Submit a Solution

Bayan Programming Contest follows an output-only style. When you have written and tested your code, you can request an input by clicking on the "Submit" area of the problem description page. A file with ".in" extension will be downloaded to your computer. You should then produce the corresponding output and save it to another file (It's a good practice to have this filed named "problem_name.out").

When you have an output file, you can submit it in the contest platform. The contest judge will analyze your submitted output and mark it as accepted or rejected.

Also be careful that each time you request an input, a different one will be given to you. So if your submission has been rejected, you should request a new input file.

Usually, a program you have written, reads it's input from standard input and writes it's output to standard output. Traditionally, standard input means keyboard and standard output means your console output on the display. But one can redirect standard input, so that the program reads it's input from a file instead of the keyboard. Standard output can also be redirected, so that program's standard output will be written to another file. In both Linux, Mac OS and Windows Console, you can redirect input and output using pipes and redirectors.
For example, if you have compiled your code to "p1.exe" in windows, by running the following command:
"p1.exe" will be run, but it will read it's input from file "10.in" and write it's output to "problem1.out". If you have downloaded a problem input file "10.in", submitting your solution will be as easy as compiling your code, running such a commands and uploading the output file along with you code on the contest problem page!

Qualification round will be held as our first official and required round of Bayan Programming Contest 2014-2015. It will begin on October 9th, 06:00 (UTC) for a 72-hour period, and solving only one problem is enough to advance you to the elimination round. This round is going to be an easy event with 3 very easy problems and 5 random participants will be receiving t-shirts.

Whether you are testing your luck for a random tshirt or are aiming for one of 100 tshirts of elimination round, or even if you are already planning for your trip to Tehran, you should not miss the qualification round. (contest.bayan.ir)

Please do make sure that you have fully read the main contest announcement. Lots of your questions has been already answered there.

Score for each solved problem is calculated based on these values:

Bayan Programming Contest is about to begin!

Video Clip of the Contest

PressTV report about the contest

So you were in the top 100 of Bayan 2012/13 elimination round? Congratulations! We're just about to start shipping the T-shirts. Unfortunately, some of the users had not provided the required information in their profile. If you are one of them, please send your detailed contact information and T-shirt size to contest (at) bayan (dot) co (dot) ir in the next 48 hours.

Have a nice time!

Elimination round is over!

Thank you all for participating in the elimination round of Bayan Contest. The final results are available. We had more than three thousand registered users for the contest on Codeforces and one third of them were able to solve at least one problem. In the meantime 1100 Iranian contestants participated in our local contest and half of them solved a problem.

We tried hard to prepare a challenging-yet-fun problemset.
The problem "241G - Challenging Balloons" was inspired from a real story! The problem described in the story was used in CEOI 2011 (Task Balloons), and the provided algorithm was the author's solution during that contest — which got the full mark indeed.
According to statistics, "241D - Numbers" was the hardest problem. A tricky approach to the solution is to ignore large inputs and solve the problem for small values of n. You may observe that it is possible to find the demanded subset within a small part of input. During the contest, no one solved all the problems but there was at least one successful attempt for each of them.
We hope you enjoyed it all!

As stated before, Top 100 contestants will be receiving T-shirts. So, update your contact information and T-Shirt size in your Codeforces profile. We'll start sending the prizes as soon as possible.

And the winners...
The winners will receive invitation letters — to the on-site event — soon. If you are one of them make sure your contact information is up-to-date.

Congratulations to all the participants, specially the winners. See you in Tehran!

The problemset has been prepared by Bayan employees. We've tried our best to make it interesting, competitive and a little-bit different! We'd like to thank Mike Mirzayanov (MikeMirzayanov) and Gerald Agapov (Gerald) who helped us during problemset arrangement process.

The contest is individual and will be held with ACM-ICPC rules. It will be having English statements only. Also, it will be rated for Div-1 contestants, but we expect Div-2 participants to enjoy it as well.

This round will be a 3hr round with 7 problems to solve. Just like most of ACM-ICPC contests, problems are not supposed to be sorted in order of difficulty. Also, the registration will be open until the end of contest, so be sure to double-check the timing.

Top 20 participants will be invited to the onsite event — Tehran, and Top 100 will be receiving T-Shirts.

Just to emphasize some rules, avoid participating with more than one usernames. Also, you should not collaborate or contact anyone about the problems.

UPD: The contest is over. Congratulations to all the winners, specially:

Because of unusual calculation of rating for this contest. The rating will be updated with delay.

Bayan Inc. is a software development company working on large-scale web applications. Currently working on a Search Engine, we face serious algorithmic challenges every now and then, and we try to provide solutions using state-of-art techniques, including Machine Learning, Natural Language Processing, etc. Salam, being one of its subprojects, is a Meta Search Engine focusing on retrieving relevant results for Persian queries.

We also hold an annual programming event in which talented programmers compete. Problems of the contest are prepared by Bayan employees who have experience of IOI and ACM/ICPC. The previous contest had a wide range of audiences. About 2000 contestants participated in the last year's opening contest.

This year, we have planned to invite participants from other countries as well. The elimination round will be held on Codeforces with ACM/ICPC rules. Top participants are invited to attend the on-site event in Tehran.